For historians, every objects of our ancestors’ daily life can appear as a material from which we can learn about the periods of time in which they lived. Clothes can be seen in this light too. Throughout history, fashion has always reflected the social status or the wealth of an individual, the customs of groups of people, and even the relation of people with their body. There is also always one piece of clothing or a style that stands out as representative of a historical period: the toga for the Roman Empire, the ruff for the sixteenth century, or the stays during the eighteenth century 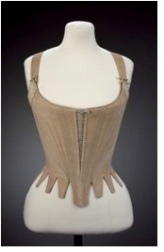 Stays were inverted conical shaped garments women wore under their dresses. They were made of thick linen or cotton weaved or glued. The stays were constructed with a continuous series of vertical channels between the outer and inner layers, in which whalebones were sewn. Whalebones gave rigidity to this garment thus allowing it to raise the breast, tighten the waist and straighten the back. They were also worn with a piece of cloth on the chest in order to cover it. Nevertheless, stays did not only shape the body, it also created the “fashionable silhouette”. Stays created a “social body” that had an extreme importance in women’s life. Indeed, there are even occurrences of women hesitating to part with their stays even though their life was endangered: “They were such an important part of her identity and self-image that she could not imagine her daily life without them” (Lynn Sorge-English, 2011, 1). One may wonder how stays emphasized the gender role and image on women during the eighteenth century. In order to study this question, we will focus on the concept of modesty, femininity and eroticism, and finally the criticism of the consequences of stays on women’s physiology.

The concept of modesty

At the time, stays were strongly linked to the idea of modesty. Indeed, “artists variously used stays to represent a woman’s honor” (Valerie Steele, 2001, p.21), and only when she wore her stays that a woman was properly dressed. On the other hand, if a woman was seen not wearing her stays, she could be considered a loose woman. 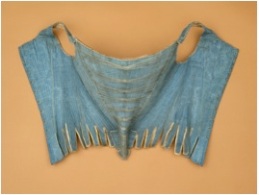 Indeed, as one can see with the narrow firm shape on the picture above, stays created a tight body and this was considered to be a sign of tight morals. On the other hand, a woman not wearing stays was thought to have morals as loose as her body. Therefore, stays were worn by women of every social class not only to have the fashionable silhouette, but also in order to be considered respectable.

In his work A Rake’s progress, William Hogarth chose to depict the dishonor of a woman through the absence of stays on her body.

In the third painting of the series, Hogarth depicted a loose woman that one can easily identified as a prostitute because of the absence of stays on her uncovered body, but also because of the black spots she wears on her face in order to hide her syphilitic sores. Well known for his use of symbolic garments and accessories in his work, the eighteenth-century English artist believed it was possible to “know the very minds of the people by their dress”(Linda Baumgarten, 2002, 52). Even though the fabric used in their fabrication varied, stays were both worn by middle-class and aristocratic women as they functioned as a sign of respectability. Indeed, “since they controlled the body, [they controlled], by extension, the physical passions” (Valerie Steele, 2001, 28).

Nevertheless, stays were paradoxically associated to eroticism. Indeed, women’s curves were exaggerated and emphasized. As Valerie Steele states in her book, “anyone who has seen more or less authentically costumed films set in the eighteenth century, such as Dangerous Liaisons, knows that the stay of that period not only push the breast upward and together, but create an illusion of amplitude not to be matched until the advent of the Wonderbra” (Valerie Steele, 2001, 20). Although stays were worn with a piece of cloth to cover the chest, stays had gained an erotic aspect. Therefore, numerous examples of this aspect of stays appeared in this period’s artistic productions. In his work La Toilette (1771), Pierre-Antoine Baudouin depicted a woman in her boudoir being laced into her stays by her maid, while a man sitting in front of her stares at her, and while his sword is pointing at her unhidden leg in a suggestive way. 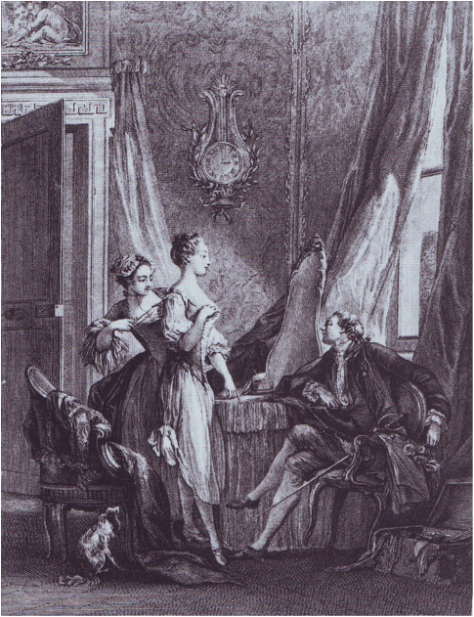 Other prints such as An Abbé Lacing a Lady’s stays or Trying on the Corset also depicted the eroticism of stays.  All these works have in common the process of lacing. At this moment, women appeared undressed but also in an erotic disposition: “including the exposure of underwear, the symbolism of lacing as a surrogate intercourse, and the way stays displayed the bosom” (Valerie Steele, 2001, 20). Indeed, the tight embrace of the garment on the body and the panting breath caused by the sudden pressure on the lungs gave women an appealing sexualized look. It appears that during the making of stays, staymakers who were mostly men had thought of the eroticism of stays in the first place: “And while some changes were almost certainly brought about for reasons of comfort, this book suggests that other changes were adopted with seduction and eroticism in mind” (Lynn Sorge-English, 2011, 3)

For modern eyes, the eroticism surrounding stays in the eighteenth century can appears as a key to understand some of the aspects of femininity of this period. While both men and women wore stays in their youth, women in the eighteenth century displayed exaggerated curves. But although stays’ design was define by gender, they were not just to differentiate men and women. Indeed, the perception of their bodies’ self-image was not just given by men; it appeared first in the eyes of women. Thus femininity was also something they wanted to achieve but they would also compete with other women for this. This idea of competition was based on social classes, indeed “class distinctions sometimes overlapped with distinctions of gender, as working-class women were envisioned as being strong like men” (Valerie Steele, 2001, 48), while on the other hand, women from the aristocracy and bourgeoisie liked to think they were thinner and more delicate.

Stays with silk damask such as this one were appreciated by aristocratic ladies.

The picture above represents a corset that had been created for an aristocratic lady as the rich fabric and the color indicate. Upper-class women appreciated such creations as it created another distinction between them and working-class women. Therefore, stays were not just use to represent a woman’s honor but also “her sexuality, gender, class, beauty and vanity” (Valerie Steele, 2001, 21). Thus, stays were worn by every woman and were the basic part of a woman’s wardrobe, even if she was poor.

Criticism of the consequences of stays on women’s physiology

According to Lynn Sorge-English, “as an article of clothing […] stays played a vital role in establishing the visual aesthetic of eighteenth-century female clothing and the body” (Lynn Sorge-English, 2011, 2). Nevertheless, criticism of stays began to arise during the eighteenth century. While some preferred to not patronize women and not treat them as if they just were oppressed by fashion: “by patronizing the women of the past as passive victims of fashions, historians have ignored the reason why so many women are willing to wear corsets for so long”, (REFERENCE) others clearly believed that men were at fault: “if those women who lace tightly from a desire to please men, had found by experience that instead of rendering themselves more lovely, they were more disliked, they would have remained content as nature made them: so that the fault is more in the men than in women” (George Nicholson, 1797, p.14). Still, wearing tight stays had consequences on the bodies, because of the pressure on the ribcage, women could not breathe normally. Lung volume and digestion was restricted by the hard laced stays, and ladies often fainted at strong emotional affection. While it could be seen as a sign of a woman’s purity (since it meant the woman was not used to passion), it was also a clear sign of weakness caused by stays. For Nicholson, who quotes Rousseau: “Infirmity or sickness may excite our pity; but desire and pleasure require the bloom and vigor of health”.

Because of their moral connotation and the influence of fashion, stays in eighteenth century Britain were the most importance piece of clothing a woman could, and had to, own. Not only did stays gave indication of a woman’s moral and social class, it also emphasized the curve of her gender (while “protecting” them with a solid and thick garment) and the concept of modesty which was seen as very feminine. Therefore, because of emphasize on women’s beauty, the symbolism, and the consequences of stays on the body, this garment managed to create a social body which emphasized the idea of a gender role and image. At the time,“easiness” was seen as the most important element of fashion. Yet, in order to wear clothes, people had to transform their body to a fashionable silhouette with uncomfortable garments and accessories. With the evolution of fashion, people chose to wear clothes that were more and more comfortable, thus leading to a gradual unfastening of stays and of clothes in general.